Recently I used Application Express 5.0’s “Group Calendar” packaged app to simulate a scheduling system. We wanted to show how external systems can be launched from within Sales Cloud and then turn around and create meeting appointments via RESTful web service calls back into Fusion, and the packaged app was the quickest way to prototype a 3rd-party “scheduling” system that can make REST calls.

I hijacked the Create Event button procedure that already existed in this packaged app, adding functionality to have the Fusion APIs create a corresponding meeting in Sales Cloud and attaching a contact to the appointment.

Here are some random notes picked up during this assignment for refining on future projects:

(tl;dr: you can use APEX to do cool REST calls and query/create via Fusion APIs)

The new R10 RESTful APIs are documented in a fancy new format, as opposed to the SOAP API format that is available in the OER.

There are really good R10 RESTful API intro write-ups on the FADevRel blog. There are also some older articles on integrating to Fusion with APEX, and although the Fusion blog entries are mostly SOAP-oriented there is at least one newer one about creating a REST request in PL/SQL (albeit not to Fusion; read on for that!).

I used apex_web_service.make_rest_request to send my requests back to Sales Cloud from a PL/SQL package so that it would fit in with the existing scaffolding in the packaged app. I originally wanted to model the Fusion RESTful APIs as Web Service References in Application Express and even got the Fusion API set up as a APEX Shared Component, but ended up rewriting the call as a PL/SQL package to match the existing Group Calendar code.

Still, the APEX Web Service References has a nice test harness to let tweak your headers and see the JSON response from your call. It helped me validate that the payload I was creating worked from APEX. Click here for a 3.4MB animated GIF of the testing harness proving it could create an appointment in Sales Cloud. 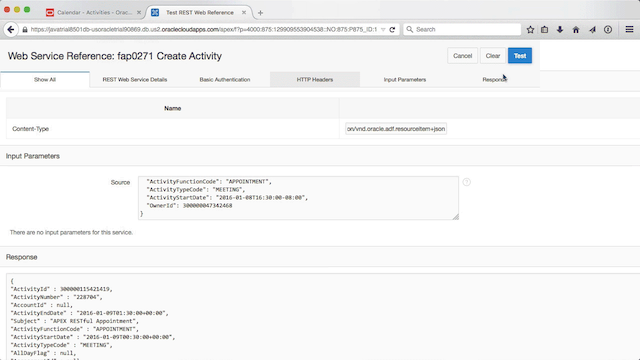 For a RESTful client to draft that payload I used Paw as a change of pace from Postman (I like them both, Paw was just something new to try). These tools were quicker for iterating over changes I made to the request payload.

When I went to implement the call in APEX as a PL/SQL package, I also created a logging table that I inserted the response (as APEX saw it) in a timestamped row. This helped me troubleshoot the more complicated, multi-stage calls that came later.

Headers for Your REST calls

One of the first things I learned was that the R10 Fusion RESTful APIs require a special Content-Type header: application/vnd.oracle.adf.resourceitem+json. You also need to send some form of Authorization header: I used Basic Auth for testing but for the APEX app I could use Bearer Auth because we passed in a JWT token on the URL generated in Sales Cloud pointing at our APEX app.

Since I wanted to create a meeting appointment, a little background on the Sales Cloud Activity model was helpful. I used GETs to query existing meeting appointments and figure out the formats for fields (note the ISO 8601 date format and the Base64-encoded description). I was able to pare down a POST’s payload body sent to /salesApi/resources/latest/activities to be just a few fields (not shown are the two headers: Basic Auth and Content-type: application/vnd.oracle.adf.resourceitem+json):

Whittle down your response payload

The response object that comes back from a Fusion REST call is huge, but it doesn’t have to be. Two query parameters can help: ?onlyData (so you don’t get all the nested links[] arrays) and ?fields=Attribute1,Attribute2 (so that your main object only has the fields you’re looking for).

Watch out for too-huge responses in APEX

This response pruning ability was handy, because there’s a bug in APEX’s APEX_JSON_PARSE when running on 11g that I ran into on our DBSchema instance. JSON responses larger than 8191 characters failed to parse, even though I could see a valid response was coming back in my log table. Turns out it’s really easy to get larger-than 8K+ responses from a Fusion REST call.

Adding Contacts to a meeting are a two-phase REST call

I needed to parse the CLOB response as JSON because I wanted to tease out the ActivityNumber field and use it to build the URL for a follow-up POST call. Our flow into the APEX app was to start from a Contacts screen, so in addition to the JWT Token we also send in the Contact_ID of the Fusion record we were looking at. When we created the appointment meeting via REST we also wanted to add the Contact as an attachment.

This necessitated a two-part REST call: the first to create the activity and the second to use the returned ID in another POST URL to create an activity contact at /salesApi/resources/latest/activities/{ActivityNumber}/child/ActivityContact. The body of that POST was only the Contact_ID that we were passed in as a parameter on the URL generated by App Composer.

APEX will let you do random GETs

Since I had been carrying that Contact_ID around from screen to screen in APEX, I thought a nice touch was to call back in to Fusion to pick up some additional details about the contact, such as full name and email address.

I used an After Header Process (after Load Data) on the APEX page to pre-populate two fields with live Fusion contact data. It might make more sense to pull Fusion data in differently for use in other APEX pages, but the one-off GET did the trick for this APEX form.

Finally, here’s my custom package that mirrored the APEX process that runs when CREATE was pressed on the existing APEX page. I just added a call to my custom package right after the call to EBA_ca_api.create_event, using the same parameters.