If you’ve scaffolded out a JET QuickStart project using the Yeoman generator, you may have noticed some Grunt tooling in a scripts folder in the root of your project. If you haven’t, give it a try at the command prompt (assuming you already have Yeoman installed):

After this runs, a message even tempts you regarding your new Grunt powers with the hint that you can change to the yoJET directory and run grunt build and grunt serve.

So we know there are at least two Grunt tasks delivered in the Oracle JET Yeoman generator. But did you know they run differently in development mode vs. release mode? What other coolness lurks in the JET Grunt implementation?

In the root of your generated yoJET application is a Gruntfile.js file. This is Grunt’s most important file, and in most projects it can get very long and cluttered with many lines of configuration for all of the Grunt tasks you want to set up.

But in the generated version, you’ll see that things are lean and tidy. In fact, there’s none of the normal grunt.loadNpmTasks() calls nor endless configuration settings. Instead, the JET Grunt setups lean on grunt-load-config and jit-grunt to implement the configs and load everything on the fly.

Notice that the configPath is being redirected to the scripts/grunt/config folder in our project. There’s a whole folder structure with Grunt settings created by the Yeoman generator: 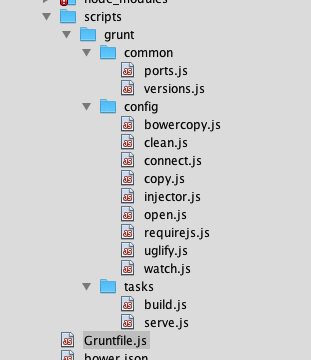 What’s up with the Scripts folder

This structure is how load-grunt-config likes to think. By separating each Grunt task’s configs into their own files it keeps things orderly and easy to edit. Meanwhile, jit-grunt takes care of loading the node_modules plugins based upon the task names you use instead of loading them all up at the beginning of your Gruntfile.

The scripts/grunt/config files fall into the proper naming pattern and contain the configurations that would normally be in the Gruntfile’s grunt.initConfig(). A module’s configs are stuffed into a module.exports object. However, note that the module’s config object notation changes ever so slightly: you don’t need the eponymous outer object named after the modules and can instead just export the meat of the Grunt module’s config. Compare, for example, the generated scripts/grunt/config/clean.js export with a sample Gruntfile config for grunt-contrib-clean — there’s no outer clean: {...} object in the JET-generated case.

The scripts/grunt/common folder contains importable variables used by the tasks and configs, such as build.js and bowercopy.js. These imports are more modular than the global values set in the Gruntfile’s data: {} object.

Finally, under the scripts/grunt/tasks folder you’ll find our two seeded Grunt tasks: build.js and serve.js. These tasks can call the other modules with various targets or even set options based upon which target you call the task with.

So the fresh-from-the-generator setup for a JET project includes at least the following Grunt tasks:

Understanding the way JET leverages load-grunt-config and how the files in the scripts/grunt folders work together opens up the possibility of tweaking the Grunt tasks to match our build process, and also gives us the knowledge needed to add additional Grunt modules to our projects.