Srikantha Bhadrasetty asked a good question on an old blog post about using JET Cookbook code: How do you reuse the more complicated recipes that lean on tools like jQuery’s DOMReady function?

In that particular cookbook entry there is a jQuery function that waits for the DOM to be built before registering the two treeModels and adding drag and drop event listeners to three pink divs. If we refactor all the cookbook code into one of the QuickStart’s RequireJS-based ojModules but leave that code in the jQuery DOMReady function, it will fire at the wrong time and the ojModule won’t load. Your console will show an error like:

The solution is to move the code out of the jQuery DOMReady $(function(){ ... }) and into appropriate ojModule life cycle functions, like self.handleAttached and self.handleBindingsApplied.

What is the ojModule ViewModel Life Cycle?

When you use ojModule to load your views and viewModels (as the QuickStart is configured to do with the help of the Router), you can hook into listeners that fire at defined spots in the ojModule’s life cycle. These are documented in the JET Developers Guide and in the ojModule JSdocs.

If you’ve used the Yeoman generator to build a NavDrawer or NavBar template project, you’ve probably already seen the placeholders for some of these life cycle functions in the template code, with a ton of comments explaining their use and an empty // Implement if needed function body for each: 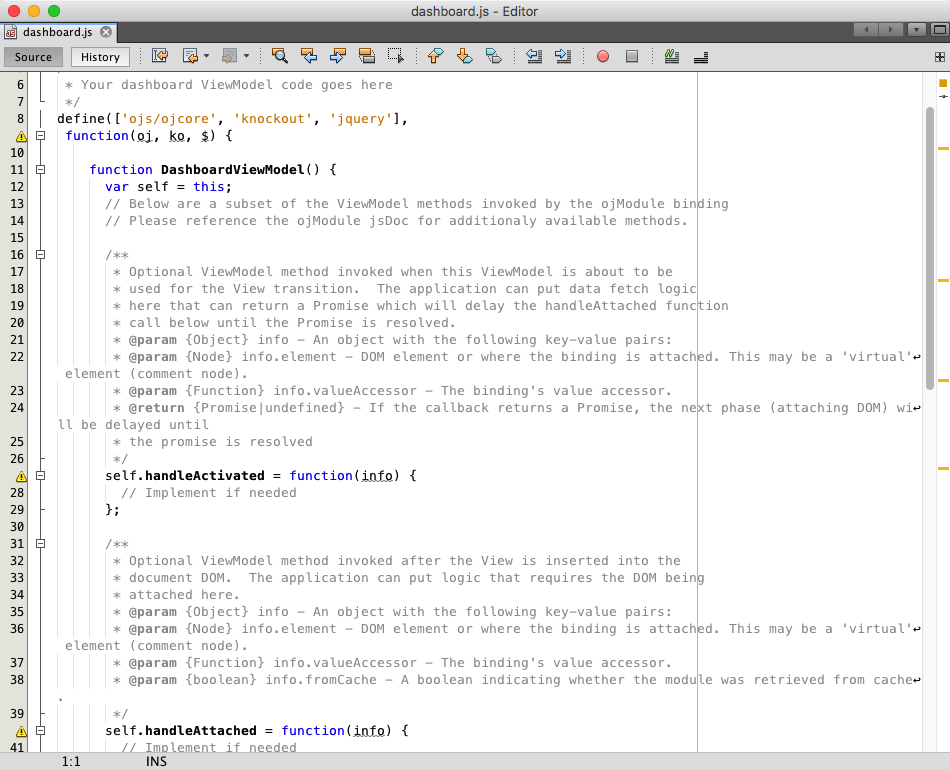 If you don’t need them in your viewModel code, it’s safe to delete these function stubs. When ojModule comes to the respective points in time to call the appropriate life cycle function, it just keeps going if the callback is null or if it’s an empty function like in the template code.

But if we have our own code that needs to run at a specific point, such as before or after the corresponding view’s DOM gets built in the browser or even before or after the Knockout bindings fire, we can leverage these specially-named functions and put our code inside of them.

For fun, I threw some Chrome timeline markers into my code like so:

This makes little orange circles that correspond to timestamp markers at the top of the timeline in the Developer Tools. You can see in the graphic below that there’s a dependable order the life cycle functions fire in and that it happens in the context of loading the current ojModule, long before a jQuery DOMReady or window.load event would fire (this image is a composite of me hovering the mouse over each circle, one at a time): 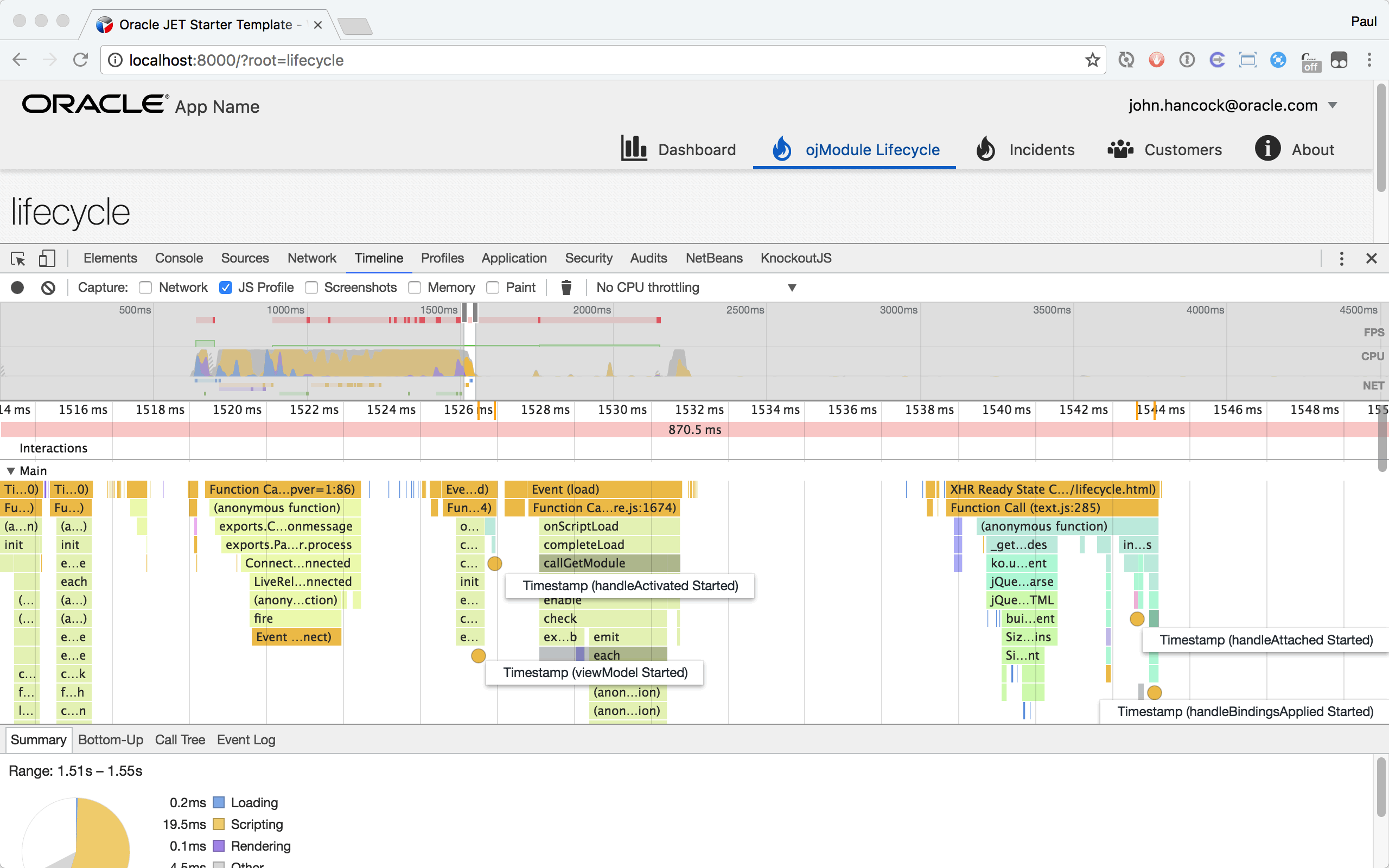 Which one to use?

So this brings us back to the cookbook code for the drag-and-drop example. How do we decide what recipe code goes into which life cycle function?

By identifying the timing points for when our code needs to run, we can pick the right life cycle function to stick it into. The comments in the Yeoman-generated template viewModels and the documentation help you decide which to pick, and here’s some thoughts on the four of them:

There are a few additional functions listed in the docs that fire at other points in the ojModule life cycle, but these are the four that are stubbed out in the NavDrawer and NavBar templates.

Going back to the problem code wrapped in the jQuery DOMReady function from the previously linked drag-and-drop cookbook recipe. I’ll annotate it with comments based on what we need to do:

For our code, we need the self.handleAttached to setup the models that build the two trees. Looking at the treeModel() function, it’s obvious the DOM needs to already be in place so that the constructor can build the ojTree structure on top of the two existing tree1 and tree2 divs.

We pick the self.handleBindingsApplied function to run the for() loop that registers the dragstart and dragend events since in the original code the ojTrees are already bound, although they technically could run earlier in the handleAttached function because they only rely on having the divs present in the DOM.

Again, have a look at the full view and viewModel code for a working example of the drag-and-drop cookbook recipe re-purposed for the NavDrawer ojModule pattern: